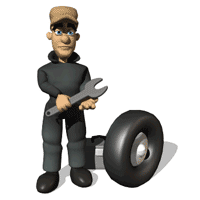 Ever since we came to Trego, 22 years ago, we have had the same mechanic that works on our cars. I hate to even think of how much money we have given him over the years to fix everything from transmissions to spark plugs. Early this week I called him to find out what a tune up on our van would cost. The first thing he said was "You are just the guy I wanted to talk to?" All I could think of was What did I do now? To my surprise he said "I'm not a religious man, but you can help solve a dispute we have been having." Then he asked, "Jesus is God's Son isn't He. Does that mean that He is God?" I simply answered his question by saying, "You won, yes He is!". My mechanic is far from being a Christian, but perhaps God is starting to get him thinking.
Then yesterday, I decided that I could tackle the job of replacing the rear brakes on my van. HA!!! It took my almost 45 minutes to BEAT OFF the rotors. They have never been replaced on the 2002 van. They finally came loose and were they ever in bad shape. Then I got a look at the emergency brake. What a mess of frozen, rusted parts that were beyond any salvaging. Guess who I called - my mechanic. When I brought the car to him, I told him, "From now on, I promise you that I will stick to the preaching and you can do the repairs on my cars." He just laughed and I handed him the keys to the van. More money, but hopefully more conversations.
Posted by FLDistad at 7:54 PM