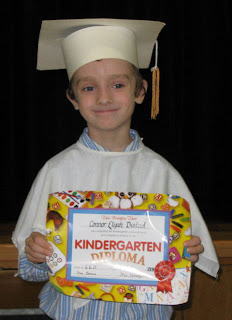 On June 6th, our grandson, Connor, graduated from Kindergarten. We really enjoyed watching them march in with their cap and cape. One of the highlights was when they sang a song about brushing their teeth. They also had a slide show of the kids during the year. They sure keep them busy. The great thing about the school he and Gabe goes to is that it is a Christian school where they are not afraid to share Christ with the kids. Where else can you begin and end a program with glorifying the Lord!
After graduation we went to a restaurant called Snuffies, where they serve old fashion 50's style hamburgers and milkshakes. I just wish the prices were the same as in the 50's. The only reason Connor likes this restaurant is that they have a candy machine that lets you keep playing until you win some candy. He likes his candy!!!!!
Yesterday we started our first week of Vacation Bible School in Shell Lake, Wisconsin with 17 kids attending. Today there were a few more. I have been teaching another Sunday School Charlie episode where Charlie and Red go to camp and encounter a bully named Muscle Mike. The theme is "Fishers of Men". Today the youth pastor had a long, long cane fishing pole with a lizard on the end of it that he dangled above the kids. (The lizard was in a plastic bag attached to the end of the pole.) Some also brought a turtle for the kids to see. maybe we should have counted the animals in our attendance?
Posted by FLDistad at 7:08 PM