Linda and I came to Wisconsin in 1987 and started to conduct VBS in 1988. One of the Bible Schools was at Casey Town Hall. Most years there would be 15 - 25 kids that would attend each year. It is easy to get discouraged and think that we are not reaching many kids in the area. But if you add up all the different kids that have attended over the years, it would be quite a few. More important, many of those kids gave their life to the Lord at that little town hall in the woods. We led several kids to the Lord right on the steps that go into the town hall. Ever so often we hear from those kids that came during the early years. Many of them are still living for the Lord and remember those times with great joy. Now some of the kids that come are the children of the ones that came in the early years. We must be getting old! Many of them have attended our camp and several have helped us as Summer Missionaries, teaching and doing puppets at Casey Town Hall and the other VBS's.
Every year that we have used the town hall, we would go a day early, clean things up and set up for VBS. For the first few years we even had an outhouse that we had to clean. That was a dirty job with lots of dust and spider webs. During the rest of the year it was mainly used by hunters a few times a year. In the last few years we have had to use a "porta potty", which was brought in for the week. If someone asked us what we use the kid's offerings for most of it, if not all of it, is used to pay for the use of that porta potty.
First Photo: 25 years ago at Casey Town Hall. Last 2 photos taken today. 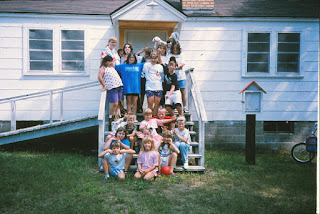 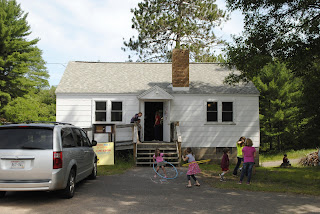 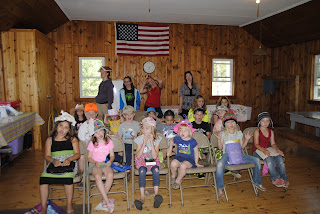 This week we are back at Casey Town Hall with 16 kids attending and teaching S.S. Charlie. The kids are all full of wiggles and giggles, but most of all they are full of life. Pray for them that God will continue to work in their lives and develop them into missionaries and servants for His glory.
Posted by FLDistad at 7:03 PM